WHAT YOU SHOULD KNOW FIRST

A PRELIMINARY NOTE: At this early stage of our development many, if not all, of the pages here are incomplete and/or make no sense. We apologize for any inconvenience, confusion, insensibility and dubiety. Please refer to our Terms of Service for more information. Meanwhile, we devote this, our home page, such as it is so far, to subjects we hold to be fundamental to the American way of life and system of justice: statues, freedom, and the Constitution.

Statuary in the USA 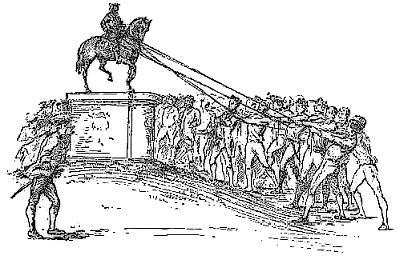 Here is a picture of patriots (some at the time would have called them insurrectionists) hauling down a statue of King George of England. Many of George's statues were toppled during the revolution (or, if you please, the insurrection), much to the delight of onlookers who would shout, "Down with Georgie!" in between mouthfuls of popcorn or candied apples which were sold by opportunistic vendors during such events.

The United States has a long history of discontent with statutes, er, that is to say, statues. The country was, in fact, founded on the principle that some statues are bad and should be toppled or otherwise removed from public view because they represent things that might offend some people or make them uncomfortable or possibly trigger latent disabling anxieties born of systemic injustice or, perhaps, misguided or inadequate parenting. For example, by 1776, many people targeted statues of King George, because he represented unfair taxes and an autocratic, tyrannical, despotic, oppressive, imperious, pompous, arrogant and dogmatic monarchy which offended many colonials although, surprisingly, not many natives, possibly because they weren't taxed for anything or, more likely, they just didn't really grasp the concept of European monarchies, by which we certainly don't mean to imply that they were inherently unable to grasp the concept, only that it was a foreign concept outside of their experiential schema. By 1778 so many statues of George and other Europeans had been toppled that municipalities ran out of places to store them, so they resorted to dumping them in the nearest river of sufficient depth. They thus unknowingly killed off large quantities of fish due to poisoning by lead and arsenic, both of which were used at that time to make statues, there being few sculptors in the colonies who were much adept at sculpting marble. Anyhow, as the spirit of independence took hold in the colonies, a principle evolved holding that the landscape should be cleansed of offensive statuary. In practice, however, the offended people only toppled the statues, and the cleansing was left to municipal authorities who had to clean up the rabble, er, that is to say, the rubble.

Freedom in the USA 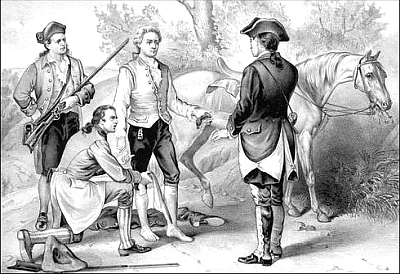 It's bad luck for this unfortunate patriot who found his merry ride in the countryside interrupted by a warrantless search and seizure!

Freedom has been the hue and cry of revolutionaries (a/k/a rebels and insurrectionists) for centuries. It's a broad concept and when shouted by revolutionaries, insurrectionists and rebels, it's seldom followed by an explanation of what it is they want freedom from. During the American revolution (a/k/a insurrection and rebellion), one might assume it meant freedom from everything they didn't like about subjugation to King George. However, there were various things that often went without saying. For example, the concept of freedom from unreasonable searches and seizures had been percolating in the minds of the colonials for some time. By way of illustration, it was well known that colonial revolutionaries (a/k/a rebels and insurrectionists) often kept condoms in their socks. British redcoats had no qualms about stopping suspected revolutionaries (a/k/a insurrectionists and rebels) in the streets and making them strip off their boots and stockings. If a condom were discovered, it was held up like a trophy for all to see. Subjecting a person to such a search and seizure in public was deemed quite unreasonable not to mention unwarranted. Some even argued that it violated a right of privacy (pronounced "priv-uh-see" by the Brits). However, this argument tended to create confusion as to whether the outrage was premised on the search itself or the attendant publicity of the seizure. This confusion obfuscated from historical preservation the fact that the unfortunate rebel sometimes lost not only his condom but any further use for it. Nevertheless, it was this historically overlooked treatment that, at the time, spawned another concept familiar to legal scholars and which found its way into our founding documents, that being the concept of freedom from cruel and unusual punishment. The redcoats, of course, considered the use of the guillotine to amputate a relatively small appendage to be far less cruel than decapitation, although, perhaps, more unusual.

Freedom and the Constitution 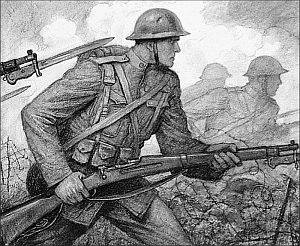 Here is a picture of heroes protecting the Constitution, the Bill of Rights, freedom, democracy, and the American way of life!

Let's take a look at the First Amendment of the Constitution of the United States of America:

Congress shall make no law respecting an establishment of religion, or prohibiting the free exercise thereof; or abridging the freedom of speech, or of the press; or the right of the people peaceably to assemble, and to petition the Government for a redress of grievances.

It’s amazing how much can be said with so few words! When you think about it, though, what does it say about human nature that it's necessary to put this stuff in writing and tell people it's the law of the land and they have to obey it? If you think a bit more about it, though, you might well ask, What did they mean by "no law respecting an establishment of religion"? Does it mean Congress can make a law disrespecting an establishment of religion? Or were they just referring to religious establishments like churches and synagogues and mosques and pagodas and temples? And why does it say "the freedom of speech" but not "the freedom of the press"? Were the founders worried that people would think newspapers had to be free? Who would print them if they couldn't charge for them? And why does it say "peaceably to assemble" instead of "to assemble peaceably"? And don't get us started about "petition the Government for a redress of grievances". How is that done? Just exactly how and where does one file one's petition for redress? Actually, later on this website we'll suggest that this is about holding protests and rallies and such gatherings. The problem is that these days people think protests are free speech, not petitions for redress. But, if you think about it, it's pretty clear that protests come under the "petition the Government for redress" language, not the "freedom of speech" language. Which alone illustrates that despite the simplicity of the First Amendment, "the people" are too dumb to understand it; particularly when it comes to the "peaceably" part.